Here is the text we are learning for this unit! Make sure you have learnt the actions and you can retell the story! 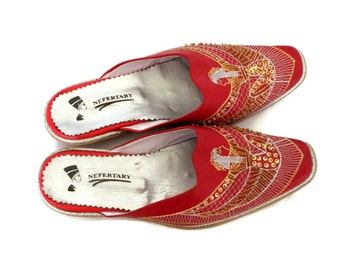 The Girl with the Rose Red Slippers

Many centuries ago, in Cairo, lived a wealthy merchant called Charaxos, who had spent most of his life trading in Egypt. Early one morning, he was ambling across the marketplace where a busy and boisterous crowd had gathered. Out of curiosity he pushed his way to the front and found that everyone was staring at a beautiful, young girl who was sobbing. Charaxos was mesmerised by the girl who told him that her name was Rodophis.

“I was kidnapped by vicious  pirates from my home and I spent most of my childhood as a slave”, Rodophis explained sadly.

Charaxos was moved by her story and replied, “I will give you a house of your own. Please live here; you will want for nothing.”  Indeed, he kept his word and cared for Rodophis as if she had been his own daughter.

One day, a strange thing happened: an eagle came swooping down out of the clear blue sky as if to attack Rodophis, who stood startled, unable to move. The eagle picked up one of her rose-red slippers in its talons and soared high into the air.

The enchanted bird flew straight up the Nile to the palace of Pharaoh Amasis. The Pharaoh was sat in the great courtyard giving justice to his people, when the eagle dropped the rose-red slipper of Rodophis right into his lap.

“What is this?” the Pharaoh exclaimed, picking up the little rose-red slipper, “Surely the owner of this exquisite slipper must be beautiful beyond compare! I must search for the owner!”

Eventually, after much searching, they reached the great house beside the Nile and found Rodophis in the garden beside the pool. When they showed her the rose-red slipper she cried out in surprise: “It’s my slipper!” She held out her foot so that they could see how well it fitted her before producing the other shoe to prove who she was.

Within days, the Pharaoh and Rodophis fell in love and were married. However, despite her wealth, Rodophis never forgot the kindness of Charaxos and they were lifelong friends.